Situations: Cultural Studies in the Asian Context is an on-line journal open to all those interested in a balanaced critical scrutiny of the cultural changes in Asia, which has become the most hotly contested terrain of cultural confrontations between all conceivable pairs of opposites─the “West” and the “East,” the foreign and the indigenous, the old and the new, the spiritual and the mundane, the individual and the collective, the modern and the postmodern, masculinity and femininity, conspicuous consumption and mass production, the nation and the trans-nation─in all of which one visible element is sorely lacking: a critical engagement with the ever-changing cultural phenonomena that seeks to contextualize, analyze, and humanize the manifold outbursts of diffuse articulation of human creativity in various media.

While we are willing to endorse the dictum that “culture is ordinary,” we seek to penetrate that facade of ordinariness by bringing forth its overdetermined subtexts.  While we are by no means unaffected by the phantasmagoria of cultural industry, we believe that cultural texts of all kinds can never transcend critical interpretation that speaks of and to them.  While we are wary of asserting the old values of humanism, we still believe humans can never be anything else than humans.  While culture for us is a porous term that embraces various and even mutually hostile configurations, we believe culture is that which keeps humans as humans in an age of increasing dehumanization.

Though funded and supported by the English Department of the oldest private university of South Korea, Situations by no means adopts an exclusive national, regional, corporate or disciplinary focus: we are open to all kinds of critical approaches and to the contributors all around the world who are interested in the cultural encounters taking place in Asian societies as well as their diaspora in other parts of the world such as the United States.  Such openness would be ensured by our distinguished international editorial board, and be enforced by the hectic pace of cultural change in the region.

Only in our staunch belief in the validity and viability of critical intervention in culture are those involved in Situations united: all the other categories, terms, beliefs, and aproaches we leave open to what we hope will remain a permanent forum of debate and discussion in this part of the cyberworld which we have reserved for critical intelligence.

For us culture is not so much a matter of taking positions as of facing the ever-challenging situations.


Main > About Us > Manifesto 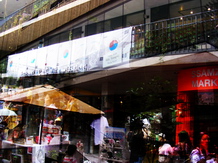