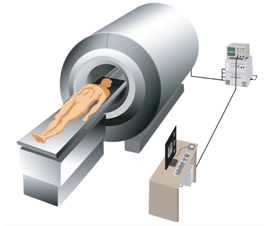 Numerous experiences have shown that practically measurable data sets in EIT system are insufficient for a robust reconstruction of a high-resolution static conductivity image due to its ill-posed nature and formidable influences of errors in forward modeling. To overcome the inherent ill-posed characteristics in EIT, MREIT system has been proposed in the early 1990s to use the internal data of magnetic flux density B=(B_x,B_y,B_z) which is induced by an externally injected current.


MREIT uses an MRI scanner as a tool to measure the z-component B_z of the magnetic flux density where z is the axial magnetization direction of the MRI scanner. In 2001, Seo-Woo-Kwon-Yoon developed the first constructive B_z-based MREIT algorithm called the harmonic B_z algorithm and its numerical simulations showed that high-resolution conductivity image reconstructions are possible. This novel algorithm is based on the key observation that the Laplacian of B_z probes changes in log of the conductivity distribution along any equipotential curve having its tangent to the transversal projection of the induced current vector field (J_x,J_y,J_z). Since then, imaging techniques in MREIT have been advanced rapidly and now reached the stage of in vivo animal and human experiments.

Seo-EJ Woo proposed fdEIT to deal with technical difficulties of a conventional static EIT imaging method caused by unknown boundary geometry, uncertainty in electrode positions and other systematic measurement artifacts. In fdEIT, we try to produce images showing changes of a complex conductivity distribution with respect to frequency. Simultaneously injecting currents with at least two frequencies, we find differences of measured boundary voltages between those frequencies. In most previous studies, real parts of frequency-difference voltage data were used to reconstruct conductivity changes and imaginary parts to reconstruct permittivity changes. 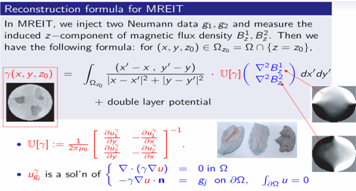 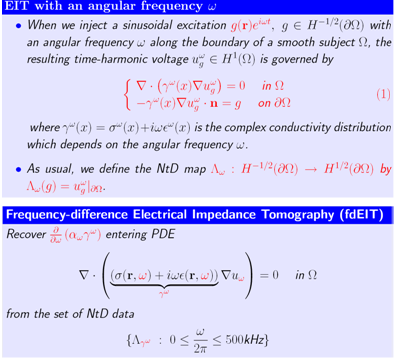